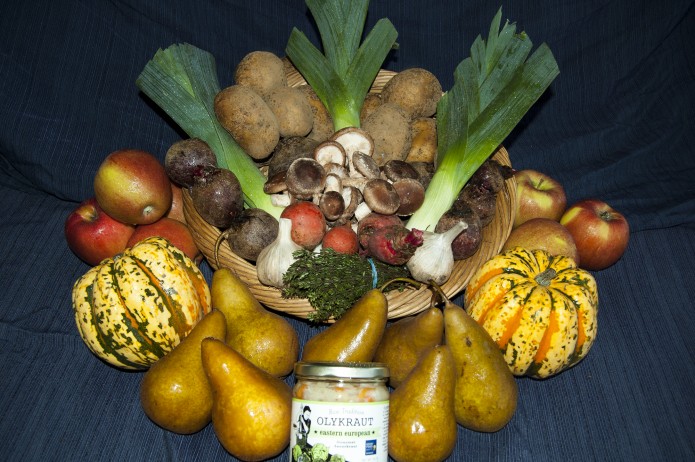 What’s in the box?

I hope this note finds you well. The sun is beaming through the office windows right now. I am at the desk… again. Ughhhhh!!! Pardon me for sharing the fact that I find this difficult. I so want to appear clever and well adjusted, but when the sun is shining I want to be out there; especially when it is such a rare treat. Back in the anciently olden times before I wore shoes every day, I farmed seasonally. (I know, I know; here he goes again, right?) I would fold up every year just after Halloween. As the farm grew, it became increasingly difficult to reinvent the wheel every year in terms of our most valued staff, and it became increasingly difficult to just leave our summer CSA members out there shopping at the Co-op or Fred Meyer and hope that they would return every spring. So the winter CSA was born.

The first two years (or was it three?) we delivered once per month, then last year we began delivering twice per month during the dark days of January through May. The idea had its roots in altruism regarding the continued employment of our staff, and the uninterrupted contact with our customers, or at least those who chose to participate. The advantages to the farm are obvious as well, and there is another significant and positive impact. Today I had a conversation with a local business owner, Justin Page, who with his wife, owns and operates Santa Lucia Coffee Roasters, http://www.justindustries.com/ . I stopped in to pick up some coffee for a customer and ordered enough to include in our first February delivery. He was delighted by the order, 175 12oz bags, and praised the farm as a ‘curator’ of local products. I must admit, the impact our purchases have on local producers escaped me, well not entirely, but because the winter CSA grew slowly, I had not recognized just how much it helps other producers in the area.

Our previous delivery included cheese from a local sheep dairy; almost 50 lbs of cheese. This week’s delivery will include kraut from a local producer who in turn buys their cabbage from us. Oly Kraut, www.olykraut.com, is a fast growing company that puts their money where their mouth is and contracts with us every year for thousands of pounds of cabbage. Included is their Eastern European Kraut with cabbage, onion, apple, carrot, caraway seeds, grapefruit juice, and Celtic Sea Salt.Owner Sash Sunday says, “This makes the best Reuben in the universe!  The caraway seeds and apple give it a distinct flavor that has made it one of our most popular flavors, and it even won a Good Food Award in 2012.” So please enjoy, and while you’re at it consider the ‘local multiplier effect’; eating well and supporting a local living economy, what could be better?